Our programs and science

The mechanisms of Noise Induced Hearing Loss (NIHL) can be classified into two main categories; direct mechanical trauma and indirect metabolic damage to the cellular components of the inner ear. Acoustic injury can result in the initiation of inflammatory and cell death pathways that remain active for days to weeks. A short therapeutic window exists post-injury where an antioxidant, anti-inflammatory or antiapoptotic treatment can enhance recovery and reduce permanent hearing loss. N-acetylcysteine (NAC) is a thiol-containing amino acid derivative that acts as a reactive oxygen species (ROS) scavenger and a substrate for glutathione (GSH) synthesis, the major endogenous antioxidant produced by cells. When NAC was combined with a nitrone-based spin trapping agent of free radical species, HPN-07, a synergistic effect was observed between the two compounds on reducing acute acoustic trauma. 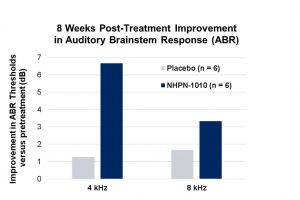 We have demonstrated that a combinatorial treatment of NAC plus HPN-07 effectively reduced hearing loss in rats when administered after exposure to blast overpressure and after exposure to an extremely high level steady state noise. Using our treatment regimen, noise-induced sensory hair cell death was substantially reduced, and auditory nerve function was preserved. Noise-induced brainstem changes were also reversed by this combinatorial antioxidant treatment. A treatment regimen of NAC plus HPN-07, when administered systemically shortly after extreme acute steady state noise or a simulated explosion, can reduce ensuing damage to the entire auditory pathway. Intervention with our combined antioxidant approach during a post-injury therapeutic window has the capacity to curtail the wave of progressive detrimental effects induced by noise or blast trauma, preventing extensive permanent injury.

We have formulated an oral drug combination consisting of encapsulated NAC and HPN-07, referred to as NHPN-1010. This drug combination was found to synergistically reduce blast-induced cochlear and brain injury in regions associated with tinnitus, memory, and anxiety. In previous studies, NAC and HPN-07 were shown to individually reduce noise-induced cochlear injury and hearing loss and to reduce brain injury in rodent models. High doses of the individual drugs were required to elicit these outcomes; thus, it was significant to find that the combinatorial therapy of NHPN-1010 gave rise to synergistic effects, thereby reducing the dose of each agent required for a therapeutic effect.

Currently, no FDA approved treatment exist for tinnitus or sensory-neural hearing loss. NHPN-1010 has successfully completed single and multi-dose Phase I clinical trials as a treatment for acute NIHL. A Phase II clinical trial for NHPN-1010 is in development for later this year.

Our partner, Oblato, a subsidiary of HLB Therapeutics is currently studying the use of NHPN-1010 for the treatment of hearing-related disorders. Article Re: tinnitus treatment:

1) How to Request Single Patient Expanded Access (“Compassionate Use”)

When treatment option with NHPN-1010 is discussed with your physician, the physician may submit a request to Oblato. Oblato has provided details below so your physician can contact us directly.

If you are a U.S-based physicians and would like to request access to the Oblato investigational treatment for your patient, contact at 609-734-4329 or contact@oblatoinc.com for further details. For a request, the physician will need to include the following:

Name and address of the physician

Details of how the patient meets all the criteria outlined below

When the physician would expect to submit to their IRB, the name and contact information for their IRB

Note that incomplete requests may delay, or exclude a request for Expanded Access.

Sensory hair cells within the inner ear react to sound waves and create the electrical signals that are than passed via auditory nerve fibers to the brain. The loss or damage of these sensory hair cells, either through direct mechanical trauma or indirect metabolic damage, has a detrimental and permanent effect on an individual’s hearing. Sensory hair cells are classified as either inner or outer hair cells. inner hair cell loss degrades signal transduction while outer hair cell loss reduces amplification of sound. Tinnitus, the perception of ringing in the ears, is a compensation for hearing loss by the brain to enhance signal gain. The accumulation of hair cell and neural synapse loss causes presbycusis, age-related hearing loss.

OPI-001 technology is capable of restoring hair cell numbers in noise-damaged rodents and has been shown to restore hearing function in mature noise-deafened guinea pigs. We are currently expanding these analyses in the guinea pig model to better understand the long-term effects on hair cell regeneration and functional recovery and to optimize our therapeutic formulation for maximum clinical impact, with the goal of restoring hearing function to individuals with long standing hearing loss. We have also investigated the use of a specific class of pro-proliferative compounds to increase the number of supporting cells that are responsive to our transdifferentiative therapeutic strategies with the goal of inducing a more robust regenerative response.

Recently, a Congressionally Directed Medical Research Programs (CDMRP) grant from the Department of Defense of $1.9 million was awarded to Otologic Pharmaceuticals, Inc. and The Hough Ear Institute for the further development of OPI-001. This was the only funded award from among the 73 applicants in the Hearing Research Program.